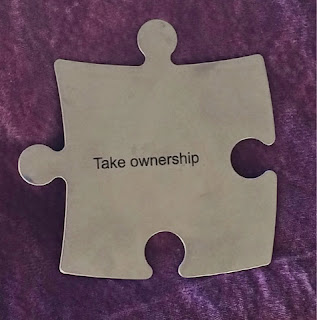 Practicing accountability is one of 13 behaviours identified in Stephen MR Covey's book, The Speed of Trust, that is needed to develop and maintain relationship trust. The other 12 behaviours were included in my blog post on Trust last week, with Straight talking being covered last week.

What we get when people avoid taking accountability or responsibility is "slopey shoulder syndrome"!

My rant the other week was aimed at those with slopey shoulders when faced with bullying, dishonesty and other unacceptable business behaviours.

A friend and I were discussing our tendency to see the bigger picture, and to do what needs to be done to solve a problem for a customer/client. Despite others we work with suggesting its either not our job, or such commitment will be a rod for our own back and we're best not to go the extra mile.

We came up with a number of excuses given:
Of course we never believe ourselves to be slopey shouldered - I'm certainly writing this feeling I'm somehow exempt, and I wonder if you're feeling the same?

The likelihood is that there will be things we all get slopey shouldered about especially when managing others or working in a team. Self awareness is about understanding if we are developing such a tendency, then deciding whether that's acceptable, or unpicking the reasons for doing it in this situation. This will ensure we don't become Mr or Miss Slopey shoulder for ever and continue to take responsibility for sorting out problems.

I think this is such a key component to developing trust. If someone goes out of their way to get something done, irrespective of whose job it is, then they will be trusted to do the same in the future. You're hardly likely to want to trust someone with a task if evidence points to them dropping it at the first sign of trouble, and/or pointing their finger at others saying "it was their fault not mine", just like we did as children.