I would say John Lewis have a lot to answer for - but the following leadership book involving penguins was written a number of years ago. So too the leadership book mentioned last week. **
A peacock in the land of penguins is a fable on creativity and courage and tells the story of Perry the peacock who goes to live in the land of the penguins. 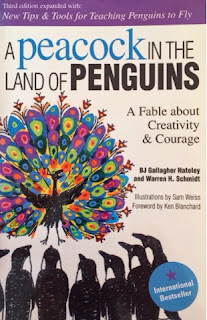 The key strategies outlined when faced with resistance to change, and an editt from the top that everyone follow penguin etiquette, are:
Not a great story for endorsing these strategies though, as all the non penguin birds who refused to become penguin like left the land of penguins and went to the land of opportunity.
So perhaps more a tale of foreboding for those who aspire to be like the penguins. A tale that reminds penguins that for creativity to flourish they need to allow other birds to:
And they personally need to have an attitude of:
Are you a penguin or one of the other birds? More importantly what changes can you make to ensure what you're doing succeeds?

* I was very excited when @mablethepenguin agreed with me on twitter that she needed to stop wishing her life away. 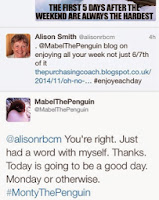 And yesterday Monty wished Smudger my cat a speedy recovery :-).

** Last week's book included Kotter's 8 steps for implementing change which were contained in a book entitled 'our iceberg is melting'. Fred the penguin had the unenviable task of trying to persuade his fellow penguins that their iceberg was melting and change was needed if they were to survive.