Influencing: We treat people as we like to be treated 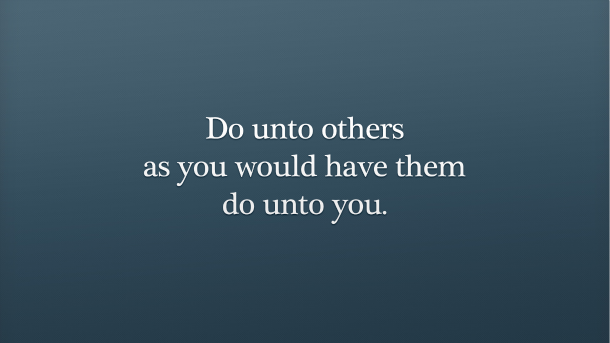 I know there's a saying about treating people as we would like to be treated but it does have its drawbacks.

The phrase is often used to remind people to treat others with respect - if someone said that to you, or did that to you, how would you feel and could you have said it differently or done something differently - along those lines anyway.

The challenge is we often unconsciously communicate with people as we wish to be communicated with and assume it will work. After all it works for us so it should work for the other person. That's the flaw in our assumption - it won't always work for someone else. Sometimes you have to do the one thing that definitely wouldn't work for you.

When I'm coaching I'm often and still really surprised how firm, direct and even down right rude and pushy I can be. But that's the problem I'm judging my tone and words to be rude based on my reaction if someone said them to me. I like to think most of the time I flex my style to suit the person I'm coaching. When ever I've asked for feedback clients have always been surprised I even thought there was a problem or reason to apologise. To them my tone and words were precisely what was needed at the time, and enabled them to achieve their coaching outcome.

I've written before on communication styles but in essence the sorts of things you need to calibrate the person for their preference with respect to:
As ever if your communication is working then no change is needed. If it's not just landing as you'd expect, and the outcome isn't what you wanted, then you may want to check in and see if you're just giving them what you want in the situation rather than what they want.

Let me know how to get on - its good to get feedback. Although I have been getting much more feedback since I started this series of blogs on influencing. I'm glad they're resonating and hopefully making a difference. I'm even getting requests for future topics to cover which is great.

A conversation on twitter in response to yesterday's blog on arrogance was such a great reminder of this.

I was asked whether I thought procurement's attitude was really arrogance or simply insecurity driven by their need to be seen to be adding value. Of course that's an option. Just not one I'd think of that quickly because no matter how much I try my preferences will sneak out in this blog. I'm motivated by affiliation so any behaviour that gets in the way of that I will judge more harshly than someone motivated say by achievement would. Just as someone motivated by achievement may judge my affiliative style as too weak! The key is whether the style we're using is working.

Just as Trust is in the eye of the beholder so too arrogance or any other judgement of someones behaviour. In the session with the procurement team they stood in the shoes of their stakeholder and realised they could be seen to be arrogant and that was getting in the way of them achieving their goal. They therefore did as this blog suggests and put their own preferences to one side and considered how their stakeholder might wish to be communicated with.