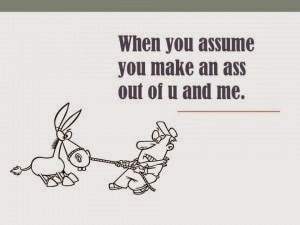 Judgements are simply assumptions and as the saying goes assumptions make an ass (out of) u (and) me.

Of course we make judgements based on evidence but that doesn't mean that we're right, and that anyone with an alternate view is wrong. Yet that's often what we think, what we react to and act upon.


First let's think about all the different things we can make a judgement on other people about:
As the above list progresses the criteria we're using is going to get more and more personal. That is expertise is easier to judge than honesty and also going to be easier to get agreement with others on too. Honesty and trustworthiness are in the eye of the beholder and yet are often judged very quickly.


Let's take honesty. Think for a moment how your judgement that someone is dishonest impacts how you relate to them.
All these just because you judged them to be dishonest!

Do you think these behaviours all support your ability to effectively communicate with and influence that person? Ok if you don't need to but a spanner in the works if you do.

Think for a moment though how do you define dishonesty?  In fact why not jot a list down of what behaviours mean someone is dishonest.

I do think jotting the list down would be a good idea because it will help me make my point :-).

Ok if you're not going to write a list here's an imaginary one (just don't judge me when you start disagreeing with it ;-)).

Dishonesty is demonstrated when someone:
Would your list have been different?
That's the point really how I judge honesty and how you judge it aren't likely to match.


Continuing with dishonesty, and that list of dishonest behaviours you wrote down.
The level of emotion you have around this, and rigour with which you hold on to your criteria, will also depend on how much you value honesty. Discussing the criteria for 'respect' or 'fairness' might provide for more or less emotion for you? (See this blog post on values to explore that more.)

The aim here is to loosen your judgement that x behaviour means y intent. To take the level of emotion out of a situation so that you can observe a behaviour and understand that your judgement of it might not be correct. Once that's possible then influencing and communication becomes a whole lot easier because your judgement isn't getting in the way, and is no longer causing that list of behaviours I wrote at the start of this post.

I've written a couple of blog post previously on honesty - one is more of a theoretical exploration and the other is a short story entitled 'iPhone iPhone in my hand' (I know a story isn't everyone's cup of tea - but isn't that what this series of blogs is all about - realising how we learn, communicate, judge, react and the like are unique and personal to each of us. The challenge is ensuring any communication, influencing strategy or change programme takes account of peoples unique preferences and provides options to keep everyone covered).

As I've been writing this series of blogs on influencing, change management and communication I've ended up writing a number of blogs I hadn't originally planned because they were needed to support the blogs I had written.

They're underlying principles that support the process of influencing. I wonder where this exploration will take me next week - any suggestions most welcome.