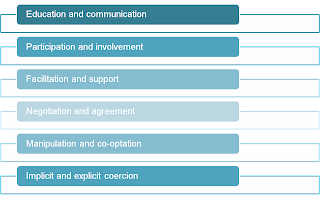 In response to this series of blogs on influencing I've been asked to cover handling change and resistance to change.

Today I'm going start with assuming you don't have any resistance yet and you're just planning to make some changes and considering you're strategy for doing this.

In which case we don't need to go much further than Kotter and Schlesinger who identify six strategies for dealing with change.
Which strategy will you choose?