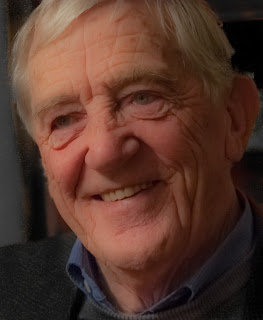 On the morning of 15th October, in the company of his loving companion Jean and two paramedics, my Dad died - his mind, body and soul slipping peacefully away and leaving this world.

One common thought those close to us have had since that time is that he died as he would have wished - at home, still independent, and with a mind still able to solve the telegraph cryptic crossword puzzles he loved so much, and with an increasing frustration at the fortunes of Aston Villa!

I know it's not a choice everyone has, and yet conversations we'd had over recent years and months certainly helped that become a reality for my dad.

A bank manager, in times when that meant something, he retired at 57 and had an active life until ill health in his late 70s stated to curtail his travels. In recent years each hospital visit was longer, his body finding it harder and harder to bounce back.

He was organised - boy was he organised - he'd written a list of his wishes - down to and including "not one single flower" at his funeral, his will was up to date, he'd chosen the music he wanted playing (leaving 2 CDs), and we even had all the details of every account he owned. Details he'd first started to pull together decades ago long before he felt death might be imminent.

He let me know where all this information had been left. That is, he didn't want anyone inconvenienced and also knew what we wanted and what he didn't want! No wondering for us if we were doing the right thing, or disagreements between siblings and family about this or that decision we were being ask to make by the undertaker.

My Dad and I had even talked of his wish to not be resuscitated. Which would have amounted for nothing if the doctor hadn't taken an hour of his time to discuss my Dad's wishes in March of this year.

"How would you like the next year to be like John" he asked on a home visit that simply included a doctor talking and listening to his patient "would now be a good time to talk about a do not resuscitate?"

As my Dad made his wishes know the doctor turned to me and said "He's very clear on that then?"

To which I replied "he always has been."

"I'll get the paperwork sorted."

Shortly after that, when his domestic carers were contracted, we had to send the documentation back as the duration of the DNR was not clear. A lack of clarity that would have meant the DNR being ignored by the carers, paramedics and the hospital for fear of reprisal.

Upon arrival to his house on 15th October the paramedics asked if there was a DNR. They were shown the paperwork and then, as his body started to fail, the paramedics honoured his wishes to not be resuscitated and allowed him to go.

I can't tell you how much peace it gives me to know that Dad's wishes were honoured. I grieve for a loss of Dad but not for his passing and know it was as he would have wanted. In March of this year he had turned to me and said "If this is my time to go I've had a good life and am happy." I honour and accept that statement.

Four days after his passing a report by the Royal College of Physicians was published saying "Doctors need to start early conversation with patients about dying".

Thank you so much to my Dad's doctor for having that conversation.

I'd also suggest though that families need to have the conversations too. Not as death approaches, but as my brother and I have done since my dad has passed, well ahead (hopefully) so that our wishes are known by those who are left behind to sort out the details.

Generally blogs end with a call to action and that feels a little weird on this subject. Never the less I will not shy away from inviting you to have the conversations you need to have on the subject.

I'll leave you with the poem my Dad asked to be read at his funeral.

"Let me go" a sentiment it feels that lay behind the wishes he made know in writing with the doctor back in March.

When I come to the end of the road

And the sun has set for me

I want no rites in a gloom filled room

Why cry for a soul set free?

Miss me a little, but not too long

And not with your head bowed low.

Remember the love that we once shared

Miss me and let me go.

For this is a journey we all must make

And each must go alone

It’s all a part of the master plan

A step on the way to home.

When you are weary and sick at heart

Go to the friends we know.

And bury your sorrows by doing good deeds.

Miss me, but let me go.
No comments:

Email ThisBlogThis!Share to TwitterShare to FacebookShare to Pinterest
Labels: death

The Art of Procurement podcast

A lovely chat with Phil Ideson on life, Procurement, behavioural skills and more - see The Art of Procurement here