"iPhone iphone in my hand who is the fairest in the land?" 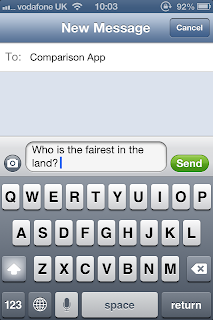 A short story for anyone who has ever compared themselves with others and found themselves lacking!


Like a lot of people Eleanor had been delighted when a new iPhone application has been launched. It was a comparison application but instead of comparing prices it compared skills and attributes. Within a week she’d discovered that she didn’t have the thinnest ankles, the glossiest hair, the whitest teeth or the most perfect breasts. She’d also discovered that she wasn’t the best nonfiction writer, communication trainer, motivational speaker or career coach. With every question she asked she found out that someone else was better than her.

Her mood therefore took a huge turn for the worse and friends and family got very wary of speaking to her. Nothing they said seemed to make any difference. In fact it made matters worse because when they listed something they thought she excelled in – she just asked the iPhone and it gave her the name of someone else. To her every name was more evidence that she wasn’t good at anything even if she didn’t always agree with the answer the phone gave. To Eleanor there was a whole world out there better at everything than her with better skills, better minds and certainly better bodies.  Whenever she thought she might have found a question that would give her the answer she craved she was always disappointed – the best bathroom went to a couple in Hong Kong and even the cleanest small bedroom window facing west (when she’d started to clutch at straws) went to a man in Canada.


Why no one else deleted the application from her phone it’s not clear but they didn’t and so she was left to make that decision for herself. Yet the decision didn’t come very quickly and many tears were shed before one night she realised she didn’t need the application any longer because she knew the truth for herself.


It was whilst reading a discussion on Facebook that she first wondered if she’d got it all wrong. A friend - well more a friend of a friend of a friend she’d met thru Facebook - mentioned in a group that they believed it was our state of being that was important not all the constant doing and achieving. Coming from a very competitive family Eleanor found this hard to accept but nevertheless after weeks of being told she didn’t excel at anything by the iPhone she had started to think she must be doing something wrong. So she tentatively started to explore what a state of being might be about. As first she thought this might mean meditating or yoga but realised they were just something else for her to do. She then wondered whether a state of being was related to what was important to her. Having realised what was important wasn’t material possessions she started to consider her values such as honesty, integrity and passion.


What was odd was that when she asked about any of these values the iPhone didn’t come up with an answer straight away. There was certainly a lag between asking the question and getting an answer. Another strange thing was she agreed with the answers given. Even more strange was what happened when friends asked the same question. They got different answers. Up to now the answers for all the questions asked had been the same whether she’d asked on her or her friends’ phones. The cleanest window really was always in Canada and the best motivational speaker really lived in Montreal. But the person who was most honest lived in Sydney, Machu Pichu, Rome or even London – it just depended whose phone they asked.


Which gave rise to a discussion about honesty and that’s when the fun really started because they couldn’t agree. Eleanor and her friends MSN’d back and forth:


Sharon: Honesty means keeping promises made, doing what you say you are going to do and telling the truth.
Jen: I agree that is means telling the truth Sharon but for me honesty means being true to yourself EVEN if it means breaking promises made to others.
Sharon: How’s that honest if you break a promise?
Jen: That IS the honesty bit – can you be true to yourself by being honest enough to say that a promise you made is no longer something that supports who you are today.
Sharon: Wow – that’s certainly honest.


Before the conversation got any deeper and wondering what she’d started Eleanor interjected:


Eleanor: You know what - I’ve just done a search on Google and most of the links seem to be about the lack of honesty rather than honesty.
Sharon: Yes it’s certainly easier to describe what dishonesty looks like. Just think how easy it is for the media to wind everyone up over one example of dishonesty for a celebrity and ignore the 100’s of examples of their honesty.
Eleanor: mmm that’s interesting - does someone have honesty until they prove otherwise or do we want them to prove they are first.
Sharon: I know I prefer to assume people are honest first even if I get disappointed when I find out otherwise.
Eleanor: and how do we identify who is the ‘most’ honest – surely that’s very difficult to achieve.
Sharon: and maintain too.
Jen: But the iPhone gave us answers - even if they were different.
Sharon: The application designers must have linked our profile data to the answers our phone gave or something. Otherwise how else did we get different answers?
Jen: You mean they somehow knew the different criteria we’d all use to define being honest?
Sharon: Wow that means they must have a very complex set of calculations for every value we could possibly ask about.
Eleanor: Hang on a minute don’t we have the same problem for all the other answers we asked. How do we really define glossiness of hair, the most perfect breasts and even best consultant or trainer? Even if the iPhone application designers have determined a definitive answer isn’t the answer still in the eye of the beholder?  Let me just tweet something – I’ll be back.


@Elliestweets: “Who is the best trainer in the world” please RT


Eleanor’s  tweet was retweeted and over the next few minutes she got many replies. Whilst some did give the same answer many were unique even if there were a few that she didn’t quite get or understand and wondered if people were pulling her leg e.g. @Pinkies Pinky & Perky or @TVcritic EastEnders. She shared all the replies with Sharon and Eleanor.


Jen: It seems obvious now but people seem to be replying based on their experience and own preferences.
Eleanor: In which case I’m not sure I want to explore Pinkies’ experiences nor preferences :-)
Sharon: Yes of course - to understand an answer we really needed to understand what the person values in a trainer.
Eleanor: That makes sense – some may like someone who is enthusiastic and a great communicator.
Jen: I know my dad would want to know what qualifications they’ve got and their level of expertise on the subject.
Sharon: Mine would consider how inspiring or authentic they are.
Eleanor: But even if we agree on the criteria I wonder how easy is it to be the best inspiring trainer for something.
Sharon: What do you mean?
Eleanor: What’s the cost to the person associated with being the greatest inspirational trainer on a subject. How many books would they need to read, how much practicing would they need to do?
Sharon: I see what you mean. I suppose it would impact on other areas of their life too – how much time will they have to relax, laugh or spend time with those who are important to them.
Eleanor: Unless that’s what makes them the best?
Jen: I just think the pressure of trying to keep on being the best would be HUGE.
Sharon: I suppose even the person with glossiest hair would have to spend a lot of time in front of a mirror.
Jen: and hours agonising over what shampoo to use.
Eleanor: or even sleep in a hair net.
Jen: :-) and refuse to have sex in case it damaged their hair!!
Eleanor: As ever the one to lower the tone Jen - thanks!
Sharon: What about the effort to be the best trainer AND having the glossiest hair
Eleanor: :-)
Jen: Best trainer with glossiest hair might be an option.
Eleanor: :-)
Sharon: I’m not sure I want to be the best at anything now – perhaps it’s easier to aim to have glossy hair or to just be a good trainer. At least then I can have a life too.
Jen: or be a GREAT trainer Sharon?
Eleanor: Great or good - yes not to be the best trainer or have the glossiest hair.
Jen: I’m so glad we’ve got that sorted – have you seen the time - I’m off to watch Glee – night night.
Sharon: I forgot that was on – it starts in five minutes so that’s me off too – night
Eleanor: Night you two. See you at work tomorrow.


That night before she went to bed Eleanor realised she’d downloaded the iPhone application because she wanted to be told she was the best at something. Whilst she no longer cared if she had the glossiest hair nor the cleanest small bedroom window facing west she realised she had just one last question:


“iPhone iPhone in my hand who is the best at being me?” she typed.


“You are” read the iPhone.


Eleanor smiled and realised that was all she needed to be and then pressed DELETE and the application was finally deleted from her iPhone never to return.