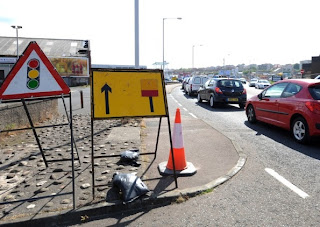 When local roadworks first significantly delayed my journey I got straight on to twitter to ask for details. I was told "they'll be completed by 4th of August". This meant an estimated duration of 4 weeks (for the roadworks not the journey :-)). Yesterday 10 days after this initial deadline I was caught in a traffic jam again as a result of the roadworks. The Twitter response this time was "closure has been extended and we don't have a completion date from the contractors".


I'm not sure where to start with my disbelief:
Which makes me wonder if the issue really is ineffective project management on behalf of the contractor and fife council or if in fact its more about us not being told the truth at the start?


The roadworks are at an intersection. Two of the roads are major routes into the town with one of them also being fed by a large estate. It's also the main route from those two directions to the main high school in this area. For anyone travelling in that direction the alternative route into town and beyond is over 30 minutes. In other words there's little alternative but to stay in a queue for 25 minutes. (I saw a bus earlier outside my house catch up with the one in front of it. Which I now realise will have been as a result of them both getting caught in the congestion.)


I suspect anyone delivering a response that congestion in this area would last for more than 4 weeks, and would therefore finish after the summer holidays would have been shot down in flames. The residents, police, bus companies and visitors would have said "No! Find an alternative plan to do what you're doing."


We've all been on the receiving end of situations like this. We ask when something will be  completed by and we get a response the person thinks we want to hear rather than the truth. After all, as the saying goes, "it's often easier to ask forgiveness than permission."


A friend has the same situation with her phone provider. There's a problem with the network. Despite numerous calls she's been given the run around as every different call centre handler tries to take her through the same fault diagnosis process. Each providing a different potential cause that points to it not being their fault. A recent Facebook advert saying how great they were was met with over 1500 responses (to date) saying they were having the same problem as my friend. So no it's obviously not the sim, phone or local mast but the network! One person even shared of being told "I'm at the mast at the moment trying to sort out the problem" as she heard the sounds of the call centre in the background.


What's the cost of truth saying I wonder that means many believe its better to fudge the issue than tell the truth. Integrity is at the heart of any relationship. Once integrity has been proved to be lacking then trust is forever and irrevocably lost. I can only think that many company's risk assessments obviously suggest (based on evidence) that the number of customers lost by telling the truth at the beginning are obviously higher than when they let people down later on. What a sad world we live in if that's the case!


In order to redress the balance we need to support integrity (#supportintegrity) - which means taking action when we get let down by someone over promising and under delivering and, as Nicolas Parsons says in Just a Minute, giving them the benefit of the doubt when they tell us it can't be done sooner.