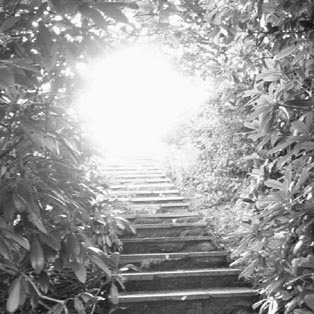 Happy New Year.
Today's blog is one I wrote as part of a series of advent blogs, for a community of HR professionals, entitled 'paths and perceptions'. I thought those not following the #adventblogs on twitter may like to read it here.

The common thread between both professions was ever present at #CIPD14 earlier this year, when I read of HR grappling with being taken seriously by the organisations it supports and works with. The same challenge we in procurement have, and it would seem, many "support" functions find themselves facing, if tweets at the time are anything to go by.

This blog explores how I have addressed the perceptions others have of the profession I am a member of, and of me. The path towards our enlightenment perhaps - but, as I write this whilst ensconced on a spiritual workshop in Northern Scotland, I would say that, wouldn't I?!
Enlightenment is never about the collective but the individual - I wonder if that's also true when we search for the professional enlightenment we all so much desire.

In the past we've banded together and identified with our professional archetype - trying to change the archetype from within. Forgetting however that the very essence of the archetype, its patterns and ways of being, have been forged in steel. Each belief, value and behaviour laid down over the years for all to obey. The more we fight against its grip the tighter it holds us.
Enlightenment comes from leaving behind the redundant archetype and embracing a new one. A new archetype free of those negative perceptions, and still warm and malleable, as those at the forefront boldly go where no (wo)man has gone before.

Is that what I achieved this year? Is that the path I took? I'll let you decide.

I started the year as a full time procurement interim for one client - commuting each week from Fife Scotland (near the Forth Road Bridge) to Liverpool. A change from the ad hoc procurement and communication and influencing training, coaching and consulting I'd done for the previous 7 years with numerous clients.
﻿

A change not least because I couldn't run away. I couldn't hide. I'd make a statement, or take an action, and was there the next day to see the repercussions of such.

The biggest insight for me was the perceptions others had of me, internally and externally:
The journey didn't come without its challenges - the politics and the game playing that were ever present - however much I played a different tune. The challenge then became about not getting dragged into such games!
Oh I didn't get it right all the time. In fact think I got it wrong more than I got it right - but isn't that what enlightenment is all about? Doing what you do well - well, and practising the stuff that comes less easily. Honesty, truth and openness are not easy bed fellows when faced with these games. Even if on reflection I realise they were the hand I needed to play more often at those times.


When I've blogged in the past, preaching at those in my profession to change their ways, its fallen on deaf ears. The more I've ranted and raged the deafer those ears have become. I realise it’s because in those moments I've been trying to change the old procurement archetype, and that's a structure that is immutable, and therefore it's an impossible task.
Since finishing that interim assignment my blogs have had more hits than ever, more engagement, more interaction. Simply because I think I've shared what I do - shared the beliefs, values and behaviours of a new procurement archetype (with the occasional rant granted!). At some level it’s resonated with others.

Slowly others it seems are also abandoning the old archetypes and joining those of us on a journey to our professional enlightenment. I realise it’s not about what we call the archetype it's about living it for all to see. Laying down the structures and patterns, so others that follow can, and will, find it more easily - so that they may know there IS another way.
I know I'm speaking to the converted, to those already laying down the new HR archetype. I just hope that, as you've learned of the path I've taken, the insights you've had will support you all in your quest for professional enlightenment - because together we WILL get there.
Wishing you all a 2015 full of new opportunities and surprise.

PS Posts in 2016 on Mr Wolf or enlightened, and Soft skills in the spotlight again - suggest this is still a real challenge faced by Procurement with limited evidence and case studies showing how it can be done.