Are procurement setback by Arrogance?

"Are procurement setback by arrogance" was a question I asked a procurement team a few years ago.

Their initial response was "who us? ....never", and slowly as the day progressed moved to "Oh - I can certainly see why some of our stakeholders might consider our language and behaviour to be arrogant." Which then allowed them to develop a different strategy for stakeholder engagement than the one they'd been adopting.

As part of discussions around the Procurement challenges series of blogs I've mentioned the outcome of a session I facilitated with a procurement team a lot so thought I'd share the highlights here.

The title of the session was:

Our Journey to world class - making the boat go faster!

And the CPO's stated objective was:

Bringing the team together, and understanding what needs to happen to ensure team behaviours support achieving personal and stretching objectives.

The agenda included a mix of sessions: communication & influencing training, facilitated discussions/breakouts, and some unconventional tools.

The underlying structure of the day followed the process I'd developed for when you're feeling like you're up a creek without a paddle (follow hypertext for more on the use of this saying, which also explains why we used the 'how to make the boat go faster' in the workshop title).

Use of the saying meant agenda items included putting the anchor down and taking time to consider: how to get back into the main flow of the river, what was needed to keep them afloat, what guides and travellers were there to help them, calibrating their compasses, and taking paddles in hand and getting going. (More here on why I use metaphor in much of my work, and why it's such a powerful, and yet under used, change management tool.)

As part of the day I used cards from the Frameworks for Change Coaching Process *, and the following setback cards came out in succession. As setbacks they're inviting us to consider how the behaviour on the card might be setting us back from achieving our stated outcome/goal. 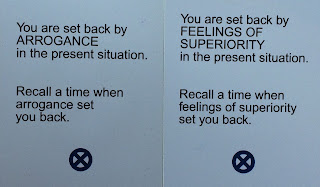 When the two cards were selected by two team members in succession, whilst some team members were open to the suggestion, I was also met with some dismissive statements.

Even when I asked "How could your behaviour be seen as arrogant" some responded with "It can't".

It would have been easy for me to label some of the things I heard as potentially arrogant, but how easy would anyone find receiving that feedback? And would that facilitate the change in behaviour needed?

I then decided to use another unconventional tool and asked them all to all stand up and move to one side of the room. I then talked them through the standing in their shoes exercise.

In this exercise they imagine looking back at themselves, and noticing what it feels like to be their stakeholder, on the receiving end of their own words, tone and behaviour. It was then that the penny started to drop - a realisation emerged that some of them were stuck in a stereotype of what procurement should, ought and must act like, rather than be more flexible in their approach and use the different communication and influencing styles we'd discussed earlier in the day.

As a coach my role is not to tell others what they should think or believe. My role instead is to provide the right environment and stimulus for them to tap into their own inner knowing and potential. Thus facilitating change inside and out for themselves. (It's certainly why I use the unconventional tools that I do - because they're great at helping people to unlock their own potential rather than have someone force the locks for them!)

As you consider standing in the shoes of your stakeholders, suppliers or colleagues would they consider your behaviour to be arrogant, and in what way might that arrogance be setting you back? As a result of that insight what advice could you give yourself to allow changes to be made that engender a more positive relationship with those individuals you wish to be influencing?

Another insight of the day significantly improved team working with their manager, and involved a conversation about the communication preferences of their CPO. I'll share that in tomorrow's post.

There's an index of posts that I'd adding to as I write post like this - using unconventional tools to unlock procurement potential to resolve challenges faced. The challenges addressed are being provided by responses to a LinkedIn discussion.