Let's talk about it 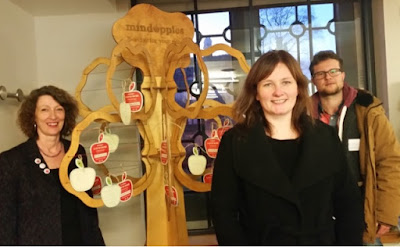 The title of the conference says it all, and was certainly the conclusion that could be drawn from all the speakers - some speaking from personal experience, others academically involved, and others in corporate life. Everyone concluded:
I attended the above conference at the University of Glasgow on Wednesday - it had been co-arranged by the University and Amy McDonald founder of Headtorch, an organisation that enables people to feel good, AND be productive at work.

The fundamental belief we're being asked to accept in the conference title is: 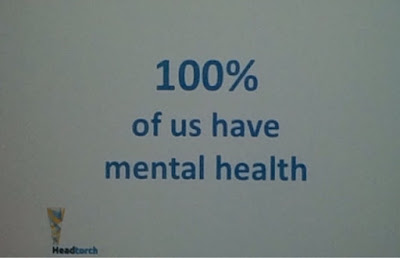 100% of the time too - ie there's no taking a holiday from our mental health. We have it at work, rest and play. That is - it's with us where ever we go.

Our mental health is variable too - a continuum that changes day to day, week to week, year to year.

There's things we can all do to support our own mental health, and there's thing we can do that hinder it.

The challenge is that we don't talk about mental health, and therefore don't find out what supportive behaviours we could be demonstrating. Which means if your actions are negatively impacting my mental health you don't get to find out, and if I could do something to support yours, I don't ask, and therefore never find out what I could do differently!

We're all blindly making assumptions about supportive and acceptable business behaviours, and yet don't fully understand what they are! Allowing fear of recrimination and stigma to stop us having those very important conversations.

That's where talking about it comes in - and it doesn't have to be big:

Here's a few of the ways that were highlighted on the day of how we could be talking about mental health at work
That was the biggest, simplest and yet most often ignored action we can all take to "overcome the fear of doing the wrong thing." Other suggestions included:

The key being to talk about these NOW - ie it's not about waiting until the lack of a conversation is causing problems! It's also about having it as part of ongoing dialogue - it's not something you do once, tick and box, and move onto the next item on your to-do list!

When will you next talk about mental health - and who will you be having that conversation with? 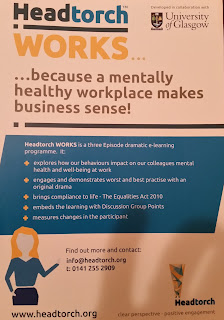 For more information on how HeadTorch could help your organisation to talk about mental health do get in touch with Amy McDonald +44 (0)141 255 2909 amy@headtorch.org

I was official tweeter, otherwise know as the OT(!), at Let's talk about it - so do please also have a look at #mentalhealthatwork to see what was said, and also follow other # who were talking on the subject on the same day #BellLetsTalk (trending from Canada with over 6m tweets on the day) #itaffectsme,
and on 4th February in the UK #TimeToTalk.

As a result of attending the conference I wrote a number of accompanying blogs (expressing my personal views and exploration of the topics raised) this cover Buyers' responsibility towards suppliers' mental health, Toxic leadership, Watch your language (about the self fulfilling prophecies we manifest by the language we use.) and Is your head in the sand about our own contribution to the behaviours we judge in others.

In 2013 I also attended Amy's conference Work's Mental, and wrote a blog entitled "it's not about the toast" based on the topic of a learning and development session. It used, and continues to do so, interactive theatre to get people talking about this subject.

Picture at the top of the page shows Mindapple's tree that we were encouraged to tie our own mindapples on (day to day activities that are good for our minds) - here's my mind apples - written some time ago.