Are your suppliers afraid to say no? 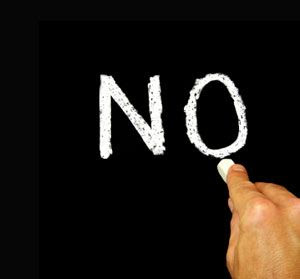 A comment left on yesterday's blog and subsequent tweets lead to one tweet last night that said I 'wish the 'n' word was used more' by suppliers. This morning Christine Tacon was named as supermarket ombudsman and said in an interview on the BBC today that she had been brought in to address the climate of fear where suppliers were afraid to say no.

There's only one answer to bullies and that's to say enough and no. To hold your ground and know that they only bully because they need a fix of belittling others. To know that their self worth is lower than yours - otherwise why else would they be bullying you.

Yet it's not as simple as that is it?

The fear of the reprisal or the outcome of saying no is often a bigger motivator than the fear of yet more bullying behaviour and the impact that has on the business or individuals health and self esteem. The perceived outcome that suppliers fear can take many forms:
Christine Tacon has only been brought in to stop the bullying (my term not hers) once a contract has been signed which for many I speak to is far too late. The bullying behaviour can start much much earlier.

Not every purchaser who asks for lower costs, however, is a bully even if the supplier says yes when they mean, and should be shouting a very loud, NO.

The solution as I see it involves:
I would love to hear your examples of saying, or not saying, no to purchasers.


Picture source and interesting blog on the 8 essential strategies for saying no: freelanceswitch.com via Alison on Pinterest