In this first week of 2017 I'm going to be sharing more about what I as the Purchasing Coach get up to. The posts won't be written in any particular order - just prompted in a particular line of thought as I see things, or have conversations, or set about my to-do list.

Yesterday's post for example was prompted by the 10 minute task for the #64MillionArtists which tapped into my values, and why I do what I do in the way I do. The post that arose from that was entitled 'Don't leave your humanity at the door.'

Today's prompt came from a more mundane activity - the good old New Year spring clean. From conversations with others it would seem it's not only me that has an urge to make order of the chaos at this time of year, that here in Fife seemed to mount up at home after returning from every trip away last year!

As I tidied up my office I came across this box of plasters/band-aids. I'd kept it with the intention of writing this blog.... 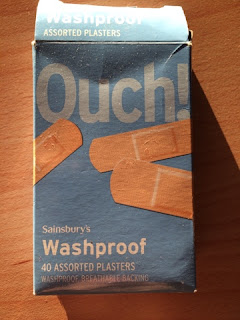 When their child has hurt themselves no parent continues to say "ouch".

Parents know when a child comes for a plaster to utter words that support the outcome they want - "there, there", "shall I kiss it better", "you poor thing" and so on.

Isn't that therefore the intention of the plaster - not for us to think it's going to make us hurt more but that it's going to alleviate our pain,

The following image seen in hotels all around the world speaks to the same issue: 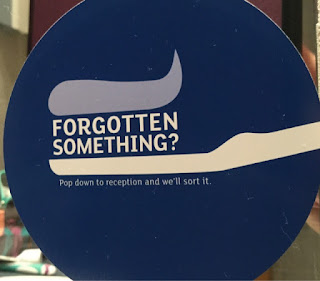 In big bold letters in bathrooms in every country of the world we're being reminded to forget something - ie to leave something in the hotel!

It's not the intention of the hotel chains nor the plaster manufacturers but unconsciously we're receiving the opposite message to the one they're wanting to convey.

I love language, and as a result have written a number of other posts exploring how our language can give us more control over the outcome and can either help or hinder us in achieving our goals. Examples include:
I also write posts over on Landscaping Your life where I use nature as a metaphor for our lives. Posts there have explored how sayings we use to describe a situation we're stuck in can also be used to get us back on track - for example:
Language is certainly something I often pick up on and explore in coaching and training sessions, in communication planning, and in procurement, category and relationship strategy development too.

In what way might your language be hindering your progress, and what changes can you make to the language that would change the outcome you're getting?

Alison Smith
The Purchasing Coach
Inspiring Change Inside and Out

More on The Purchasing Coach services being offered in 2017 can be found by following the link, and do include exploring the language being used within teams and with suppliers.