Are you suppliers without ego? Are you? 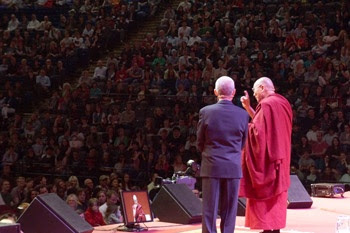 I wasn't able to get a ticket to see the Dalai Lama speak in Manchester this weekend but I did mange to watch the live webcast. I could blog about many aspects of what his Holiness had to say about non violence and dialogue in conflict situations. Yet it's the insights from watching his translator that I'd like to share with you today.

The Dalai Lama does have an excellent understanding of English but has a translator on hand on the stage. From observation it would seem this is done to assist with conveying the subtleties of what he's trying to say and checking understanding of questions asked.

As the translator stands only feet away, and at times interjects rephrasing something his holiness has just said, he's not invisible. Yet what I took away from him was his lack of EGO. I have no idea who he is, what his thoughts or beliefs are about what was being said. It seems clear to me that his intention is to simply be of service to help the Dalai Lama convey his message.

Without that ego he:
With ego I'm sure we'd have had a much different experience.

Yes it's his job - but mine, yours and our suppliers jobs all require the same behaviours and yet often the ego and its need to be seen, heard and acknowledged gets in the way of service being delivered.

How will you aim to silence your ego today?


Source of Dalai Lama Picture: dalailama.com via Alison on Pinterest