"I just feel very lost" said a coachee during a coaching session.

At the time I suspected if we spent too much time discussing the real life situation that they'd stay well and truly lost. That is, all the reasons they couldn't see a way out of the current situation would just be discussed in more detail - as if to compound and reinforce them feeling lost.

Consider feeling lost for a moment - what happens to your body, your emotions and your thoughts? For many flight or flight might kick in with the accompanying disconnection from the part of their brain that might be able to help find a solution, and get out of the situation.

It's why I use metaphor to help people get unstuck so much - because it's a great means of bypassing the blocks we have to finding a solution. (Or perhaps its the answer we're looking for, or resolution, which is a another topic and post altogether.)

With the belief that the language we use to describe being stuck is also the solution I asked:

"Where are you lost - is it in a wood, a maze, a city or somewhere else entirely?"

In response to their initial look of confusion I explained.

"If you were to describe the feeling of being lost - metaphorically is it more like being lost in a wood, a maze or somewhere else? That is, put the current situation to one side for a moment, and just concentrate on the words 'being lost' "

Having written and explored 'not being able to see the wood for the trees' frequently and deeply I was hoping 'in a wood' might be their answer. 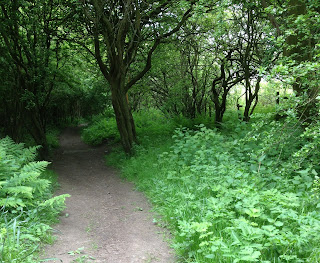 "In a maze" they relied.

"Could you draw the maze" I asked?

"Yes" they said, and promptly drew the maze for me. 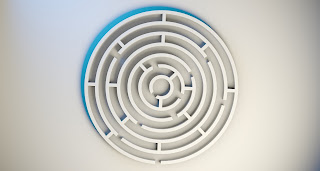 Just to clarify - if you're not lost, and not lost in a maze you may wonder what on earth I'm talking about. What's important is that the person using the words can identify with them. Even to them it may feel weird, sound weird and look weird, but a part of them that is identifying with feeling lost in a maze is able to say "I feel like I'm lost in a maze" and answer my questions. In the same way that someone who describes 'going around in circles' can draw the circles (and I've had some great successes with that one as you'll see if you follow the link to the post on the subject")!

How the situation, that you're feeling like you're lost in a maze about, is resolved will be unique for each individual.

Some may need to go to a real maze and find a way out of it. 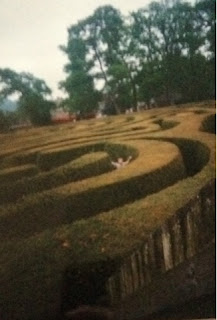 Others may want to just envisage in their mind being in the maze and turning left and right.

Others may find drawing the map is enough.

In this case I simply asked them to find a route out of the maze using their finger as a guide. Having first asked them to give the feeling of being lost a score of out 10.

I just asked them to repeatedly get out of the maze. The first few times they got lost and had to turn around but after 9 or 10 turns they were able to go to the centre of the maze and get out immediately.

After exploring the metaphorical maze I then asked them to consider the real life situation they'd previously described as being lost in a maze about.

"Oh I just need to do x, yes that feels much better" and we developed an action plan, that at the start of the session had been eluding them. Which brought the score down further.

I suspect following the action plan agreed would have eventually brought the lost score down to 0.

How might your language be giving you a clue to where the answer might metaphorical be found? I've also written about being stuck in a rut, being up a creek without a paddle and the impact of believing no pain no gain.

Email ThisBlogThis!Share to TwitterShare to FacebookShare to Pinterest
Labels: language, metaphor, sayings that keep us stuck, unlocking your potential