How attractive are you to suppliers? 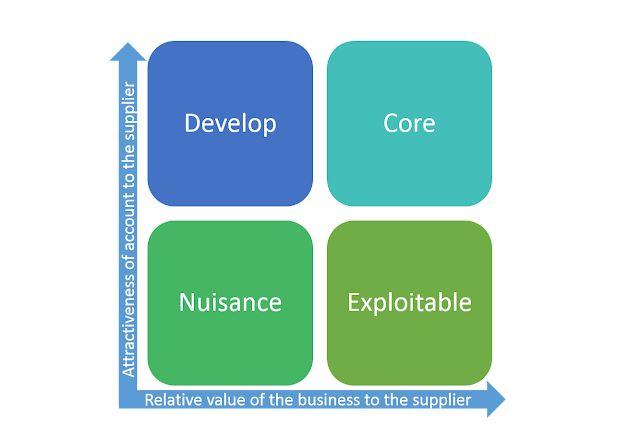 In the majority of procurement literature, workshops and exams buyers are asked to consider the above 'supplier preferencing' model. It identifies 4 potential ways a supplier can 'view' the buying organisation.

As with many business models it's value is delivered from the conversation that arises. A conversation that helps us understand how our suppliers, and we as the buying organisation, might relate to it. It involves the buyer considering:
The premise is: a supplier who sees your account as highly attractive, AND as contributing a larger share of their sales is likely to see your account as Core. With the same level of attractiveness, but smaller percentage of sales, it becomes an account they would like to Develop. The potential problems arise when an account isn't very attractive - with the resulting potential for either Exploitation or being treated as a Nuisance dependant on the relative value of the sales.

The main reason for using this model in workshops is to invite buyers to consider the behaviour they may be demonstrating that might be seen by a supplier as unattractive, and therefore is very likely to be contributing to less than helpful behaviours from the supplier. Or, if they aren't doing currently, might do so in the future.

In no particular order the unhelpful buyer behaviours suppliers may see as unattractive include:
Consideration is also given to what behaviours might be considered attractive - many of which are the opposite to the above.

Yes sales is attractive, but this model is asking buyers to consider what might detract from the value of the sales, and mean the buying organisation's needs are not as important to the supplier as we would like them to be. 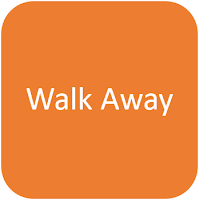 It's a strategy a supplier has irrespective of turnover, but certainly something they're more likely to consider if the account is becoming increasingly unattractive. This is a point I often find myself disagreeing with other buyers and colleagues about - the assumption that any sale is better than none. I believe for every supplier there will be a point where the level of unattractiveness means a supplier will decide the best option is to walk away.

When sharing the model in workshops we often use the metaphor of personal relationships. With first dates, dating, marriage and divorce being mentioned. We've all known people who have stayed in a relationship well past its sell by date, and as a consequence their health, well being and sometimes financial health are compromised. It's no difference with suppliers - there will be a point - if pushed to far - when they say "enough" and walk away.

Assessing power between a buyer and supplier can only take you so far. Once someone's values such as respect, honesty, integrity and fairness are being compromised you'll be surprised what people are willing to do despite the consequences. (My blog 'Ethical behaviour comes with integrity' also discusses what people are prepared, and not prepared to put up with as a result of their values).

I would love to know your thoughts - as a supplier have you walked away when everyone else would expect you to stick around, and put up with what you believe to be unacceptable behaviour. As a buyer have you been surprised when a supplier has made the decision to just walk away, and what were the reasons given.

For blogs on other topics covered during procurement workshops see blog entitled I've written a blog on that.