#indyref and procurement part 2 - the grass is greener 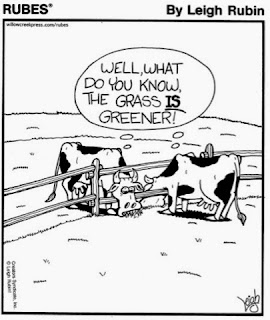 Procurement are often told by others in the organisation they want to use a new shiny supplier who has promised them the earth because then all their problems will be solved. They try to persuade procurement they can't use the current supplier because of poor performance and lack of confidence about their ability to deliver in the future.

I often use gardening as a metaphor for purchasing as it's often easier to relate to the fact that we've forgotten to feed, prune or weed our suppliers. To recognise that they'd be the perfect supplier if only we'd read the instructions about where and how to plant them, and if we fully understood the perfect environment that would enable them to flourish and so on.

Politicians are politicians - I don't have any higher expectations of one than another. Although just like many suppliers politicians do seem to have the tendency of over selling what they can do, and then under delivering once they're in. One reason its useful to keep contract length under review to keep them on their toes. Unlike a new supplier, however, where there's a contract end date the #indyref decision is final - so let's not get carried away with the rhetoric and stick to the facts and data about current poor performance and future performance.
Certainly any supplier suggesting they're significantly better than any other would need to be evidenced to be believed. I don't have any evidence that Scottish politicians are any less or more trustworthy than British ones. David Cameron, Alex Salmond, Ed Milliband, Nick Clegg or Nigel Farage are all equal in that respect.

Which means rather than throwing the baby out with the bath water, if that isn't adding in yet another metaphor into the mix, I need to concentrate on the policies of the parties these individuals represent and understand the impact they will have on my life and the country in which I currently live. The fact that someone is from a particular country or party is not in and of it self evidence that they're better than anyone else.
As an English born, Scotland living procurement professional this is one of a series of blogs looking at the analogies between the Scottish independence referendum (Indyref) and procurement. The first blog tackled the need for facts and data to identify the increase and reduction in revenue, cost and risk for every aspect of running Scotland as an independent nation.