You can't always take the blogger out of the girl I find and having convinced myself of the folly of writing this blog five days ago the subject matter continues to swirl around my mind and I realise its something I care about too deeply to ignore.

On Friday a FaceBook update from the British Heart Foundation appeared on my news feed. It said ' I hate heart failure because........' 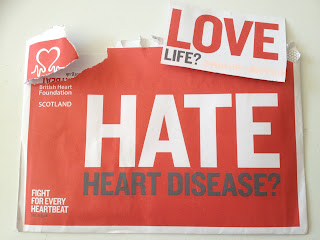 Please tell me I'm not alone in being perplexed at the languaging here? I couldn't get past the first few comments because of the negative energy it produced. Every comment starting with the words 'I hate heart failure because ....' and giving their reason.

I'd love to know what the British Heart Foundation thinks contributes to heart failure? If this update is anything to go by they certainly seem to be forgetting the mind's contribution. For me they might as well have been inviting us to a party where the only food on offer was cream cakes, pies, white bread sandwiches, processed foods, chocolates, sweets and plenty of fizzy drinks. I'm sure that decsion would have been seen as inappropriate (and they agree here re junk food advertising) - so why is this appropriate?

I thought I might be over reacting and that this was just a simple mistake of someone posting on their behalf. Then I realised its an advertising campaign!!
It's not lost on me that this blog has a negative energy about it that I suggest it not something we should foster. Perhaps the BHF felt the same as me that sharing frustration was valid. Perhaps we both have the same objective to make a difference. For me I hope this blog acts as a reminder of the impact the language we use can have and the mind/body connection. I can't answer for BHF - they certainly got a lot of people 'hating'. Let's hope it also makes us all realise we don't want to hate anything that much and start to think about lifestyle changes we can make to reduce the risk of it happening. After all - that is what we all want - right?

Although I will be starting by not hating anything!


PS: Having expressed my exasperation with the marketing campaign I realised I needed to let it rest otherwise I'd be receiving the very services BHF are researching on behalf of! A few days later, however, I was not allowed to leave it alone. Imagine the scene as I come down the stairs to big white letters staring up at me proclaiming HATE! (as shown in the picture above). The smaller grey letters weren't even visible at this point and the 'LOVE life' was much smaller and, like buttered toast, the envelope had landed love side down on my mat after being posted there by the postman.  It certainly brings a whole new meaning to the word hate mail that's for sure. I'd love to know if the absence record of royal mail went up last week as a result of those poor postmen having to deliver these to house after house. Although the only saving grace is they would have been looking at the address and at least that invited them to LOVE life (even if with less gusto than on the other side.)