It's nearly 5 months since I last wrote a blog - the longest I've not written a blog for years.

The blog in April was entitled adrenaline junkie and described how I knew it was time for a break from work because my priorities were out of wack. That is work was becoming more important than my well being - sitting at the computer at 0630 was more important than eating breakfast, and replying to every email as soon as it came in was an urgent priority.

Having taken a week off in early May I returned with my priorities realigned, and the adrenaline back to normal - which resulted in a break from social media too.

Of course it's freed up a lot of time and it's allowed me to prioritise work I'd been ignoring, and start writing of a completely different sort - more of that in future blogs.

Today's news that a BA flight had to abort landing due to a fire in an engine had me wondering about priorities again. These pictures hopefully explain why? 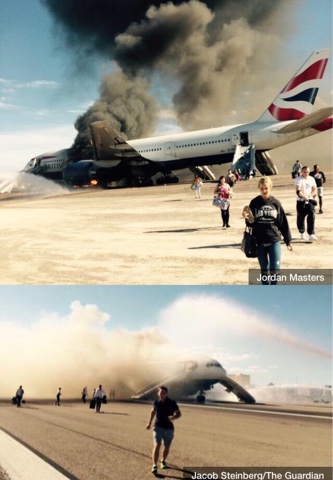 I imagine that as smoke swept into the aircraft, and the pilot ordered "evacuate", that the passengers' fight/flight mechanisms kicked in. When that happens it becomes about self preservation - it's why people may be seen pushing others out of the way or acting very selfishly in order to survive, it's also why parents put the survival of their children above their own lives.

I can't quite understand however how it explains people evacuating with all their baggage - not just the baggage under their seat but from the over head locker too!!

From my understanding, albeit basic, our fight/flight mechanism is about survival, For those passengers to have disembarked from the plane with those bags means 1 of 2 things - their fight/flight mechanism didn't kick in and they just followed normal learnt behaviour when disembarking, or they value their possessions as much as their own children or life.

5 months ago my iPad/iPhone had become too important an aspect of my life and I recognised the addiction I had for them, and took time off to allow that addiction to dissipate. Today I trust that those passengers, who are so addicted to their possessions that they endangered their own and other passengers lives to save them, will also recognise the addiction they have and take appropriate action before someone dies as a consequence.