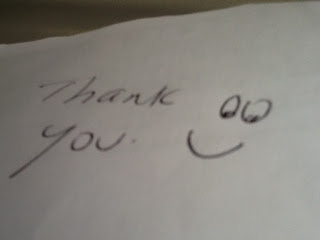 The guy taking rubbish on the train has just gone through the carriage. Of course, as I handed him the rubbish, I said "thank you" as I got eye contact and acknowledged him for the work he does. Not many others in the carriage did the same.

I often walk up to the guys working for Fife council who clean the local beach, park, streets and roads and do the same. I'd suggest 75% of the time they're surprised at me making the effort. Appreciative of the recognition certainly, and yet surprised too. I once stopped the car in a local B road between villages to thank someone - I think he was shocked. I'm assuming for the thank you rather than feeling threatened by my actions.

When I mention it to others the response I often get is "they get paid for it". Yet those very people, giving me that response, expect thanks for their work. It's as if that's different somehow.

If you never got thanked for the work you do how would you feel? It's nothing to do with getting paid, or who's doing the paying, it's to do with courtesy.

Who will you thank today?

Email ThisBlogThis!Share to TwitterShare to FacebookShare to Pinterest
Labels: appreciation, gratitude, thanks